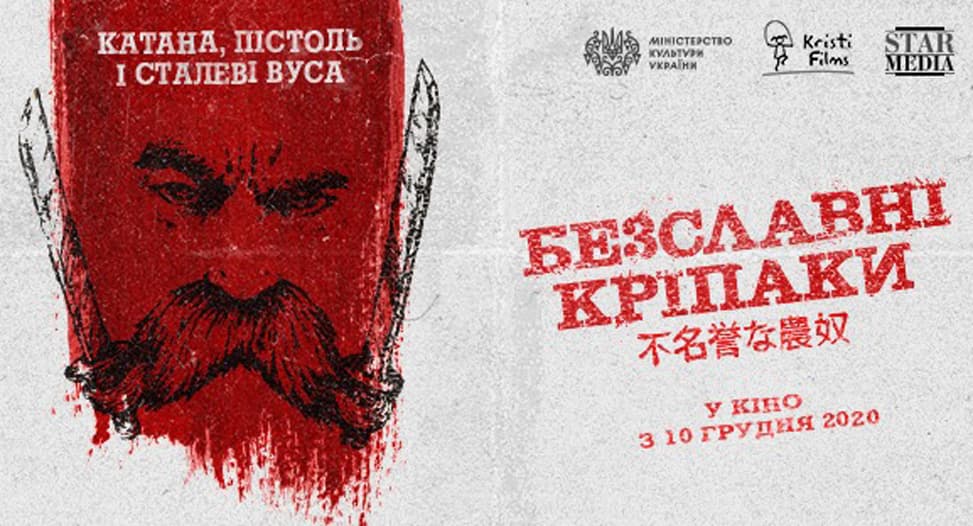 The film “Inglourious slaves”, which will unite the samurai, the Wild West and Ukrainian serfs, will appear in cinemas at the beginning of winter. The new release date for the historical action adventure is December 10, 2020.About this informed cinema.in.ua press service of the film. The new film by Director and screenwriter Roman Perfiliev “Inglourious slaves” is another attempt to modernize the figure of the great writer Taras Shevchenko and make it popular for young people. What happens if a writer puts down his pen and picks up a samurai sword?

The rules of the samurai are simple: to fight with two swords, to train for half of a day and not to run into trouble for the sake of feeling. But how can one accomplish one thing when your name is Taras Shevchenko and when your girlfriend is mugging by a bad guy, and your mentor is smacking you to train your iron will? You have to become a samurai in 2 days: shoot in “Macedonian”, run fast and finally stop staring at a geisha.

By plot action in the film takes place in 1844. Escaping from the persecution of the Emperor of Japan, a samurai enters the territory of Ukraine. By chance, he meets a young Taras Shevchenko, whom he decides to teach techniques of traditional Japanese martial arts. Together, the heroes begin to fight for the freedom of the Ukrainian people.

Director and screenwriter of the film — Roman Perfiliev. The operator is Dmitry Nedrya. The role of Taras Shevchenko is performed by Roman Lutsky, in the image of the samurai Akayo — Sergey Strelnikov. Also, the main roles in the film are performed by: Yakov Tkachenko, Gene Seto, Catherine Slusar, Andrew Boris, Andrei Malinovich.

According to the creators, the film “Inglourious slaves” is not only a visually delicious story about samurai in Hasidic clothes, who rush over the horizon on lively, probably stolen, horses. And not only stunt stunts, explosions in breaks with almost comedic stand-ups by Roman Lutsky and Sergei Strelnikov. This is also the exciting music of the famous Netflix European composer Dario Vero. In addition, the soundtrack to the film “Inglourious slaves” was recorded by popular rap artist Alina Pash.

Roman Perfiliev, Director of the film “Inglourious slaves”: this is an absolute comic movie, an attraction