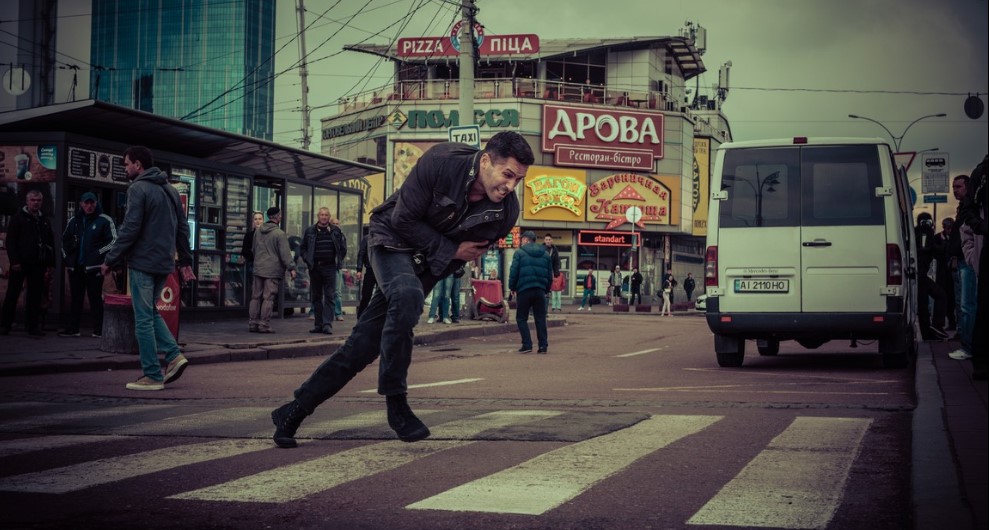 The film “Legacy of lies”: an old-school spy thriller with Kiev landscapes and a soundtrack from the band “Океан Ельзи”.

“Стопов, поворотов нет!” – it is written on the bus sign in an abandoned depot, where the opening shootout of the Ukrainian-British thriller “Legacy of lies” takes place. When information about the film was first published online, it was clear that it would be a fierce genre movie “class B” with nostalgia for Bourne and martial arts. There were two points of interest. The first is that finally such a film will be made in Ukraine, the second is the performer of the main role Scott Adkins.

In our time, it is not customary to know the names of actors who have adopted the legacy of the 90’s. The pure karate-action genre is dead. It was replaced by an action shot on chromakey, or, at best, which brings tricks and postmodernism to the fore (hello to John Wick). Therefore, films such as “Undisputed II: Last Man Standing” and “Ip Man 4”, which starred Scott Adkins, have become a breath of fresh air for fans of the genre. And all this baggage Adkins, together with director Adrian Ball, under the guidance of Ukrainian producers, brought to Ukraine.

In the center of the story – a fairly well-known toxic substance and the Kremlin with its sinister plans. All this is joined by MI6, the CIA and still unknown secret services, as well as the antagonist with a daughter in his arms, who is torn apart by the ghosts of the past. Although it is more accurate to say – a daughter with a negligent father in her arms. And here is an interesting departure from the genre, because the protagonist named Martin is far from heroic and in general still that loser, even if it looks like a brutal macho.

From London, the plot sends the characters to Kiev, where under the melancholy vocals of Vakarchuk, the viewer sees the landscapes of the Ukrainian capital, which are described as either winningly beautiful, or with their own terrible slums. But without extremes, as in other attention to Ukrainian (borscht still remember).

Everything is spinning madly and Martin is ready for unjustified violence in the name of good, which itself will save anyone. The special services of all countries, except the the country where the hero of the film is located, are bustling around. Unless some Colonel Zelenka is remembered (laughter in the hall). But already at the equator of the film it becomes not up to laughter or skepticism because of meaningless dialogues – conflicts escalate. And suddenly, St. Sophia square becomes what it should be in a movie-a setting against the backdrop of events, the ending of which seems less and less predictable.

Another interesting thing. If you like strong female characters, then here everyone, even the minor heroine, is a head stronger than the male characters. And you only regret that instead of a bunch of unnecessary scenes that do not help the plot, there was no place for a couple of scenes between Yuliia Sobol and Anna Butkevych. Here would be where the conflict and action began to play with fresh colors! In General, women here outperform all men with one eye, this is the gender inequality.

“Legacy of lies” makes many references to current geopolitical conflicts. But despite all the grandiose superstructure in the concept and the hopelessness of the situation, the plot is quite simple. The heroes want justice and truth, and the burden of the legacy of the past to let go, and what would not have to sacrifice for this – it does not matter. However, after the scene at the Kiev railway station, unmotivated violence finds meaning, and tension – its apogee. And if you go to the movies for a strong atmospheric Thriller, this movie is not the worst choice. But do not forget that this is only a “class B” ekshn, and it does not claim to be more.

Thriller “Legacy of lies”: interesting facts about the film on the occasion of the premiere